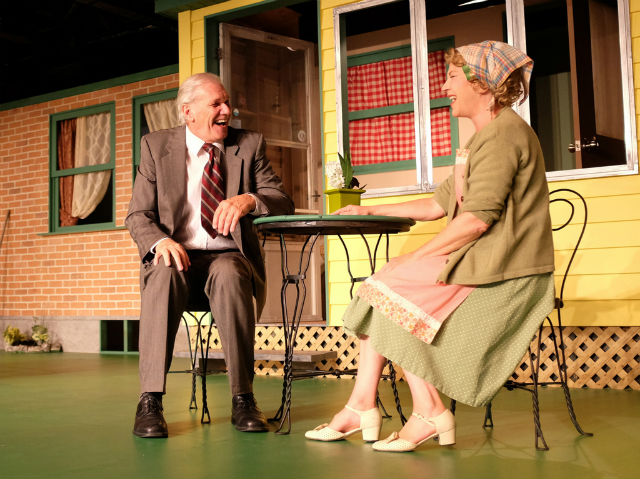 Of all the additions and improvements that have helped transform the look and spirit of downtown St. Catharines, only one has helped “foster” a new appreciation for the city as a destination for must-see live theatre.

What the Shaw Festival is to Niagara-on-the-Lake, The Foster Festival – the very first theatre festival in Canada dedicated to celebrating the work of pre-eminent Canadian playwright Norm Foster – is rapidly becoming to the Garden City. Now entering its fourth year of staging exceptionally well-reviewed productions of Foster’s work, the Festival is growing in terms of both awareness in theatre circles and popularity with audiences according to Artistic Director Patricia Vanstone.

“Within the theatre community itself, we’ve achieved a great deal very quickly,” said Vanstone, who besides directing the Festival will also be teaming up once again with Foster as lead actors in this year’s production of Hilda’s Yard. “That’s largely because Norm Foster has given us the right of first refusal to produce all his latest work. The traditional producers of Norm’s work are looking at what we’re doing and seeing the great successes we’re having with our audiences. That has put us on the map across the country very quickly.”

For those unfamiliar with his work, Order of Canada winner Norm Foster is a true Canadian icon. As one of Canada’s most prolific playwrights, Foster has had more than fifty plays produced on professional stages across North America and as far away as Australia. Known for penning stories that are rich in humour, accessible dialogue, relatable storylines and keen insights into the everyday tribulations of life, Foster’s work is frequently compared to that of American playwright Neil Simon. He continues to produce relevant new works at a prolific pace, and with new world premieres slated for the 2019 Foster Festival, it doesn’t appear Foster will be reducing his output any time soon.

“I think that Norm is truly engaged in the world,” suggests Vanstone as the reason for Foster’s continuous output. “He’s already talking about what he’s written for next season, so we’ll have two more world premieres next year. I think he’s just got a great curiousity. When you stay curious and open to ideas you just can’t stop. It’s not work, it’s just a great joy to find the way to tell a particular story.”

The themes and characters woven into the three productions being staged at the FirstOntario Performing Arts Centre reflect Foster’s storytelling diversity. The 2019 season kicks off in June with The Writer - Foster’s 60th world premiere starring Shaw Festival veteran Guy Bannerman as Donald Wellner as the eponymous Writer of the title. The story explores the connection between parent and child as the paternal care-giver becomes the cared for Next up is a new adaptation of HILDA'S YARD, which features Foster and Vanstone as Hilda and Sam Fluck, a couple looking forward to rekindling their romance in their “Golden Years” who suddenly have to deal with the unexpected return of the children and some very exotic visitors. The third and final production is the Foster Festival’s first world premiere musical. BESIDE MYSELF features Shaw/Stratford veteran Gabrielle Jones and Mirvish star Jonathan Whittaker  side by side with talented newcomers Griffin Hewitt and Niagara’s own Breton Lalama.  Given her role directing the productions and starring in Hilda’s Yard, Vanstone says she’s happy to be working alongside Composer and Musical Director Steve Thomas on the festival’s first musical.

“In a way it’s kind of great to have someone in the driver’s seat beside me," said Vanstone, who will also be directing the Festival's very first holiday production in December. "And certainly with the performance schedule on Hilda’s Yard I’ll be directing simultaneously, so he’ll have lots of musical production time when Norm and I are in performance. Steve’s written some beautiful melodies for this production, and a song called “I Used To Rock” that’s going to bring the house down.”

Filling up the house and continuing to grow local and regional awareness of the high quality theatre productions being staged by The Foster Festival is the first order of business for Vanstone and her team. Festival organizers are utilizing a variety of platforms to showcase both the Foster Festival and downtown St. Catharines as a destination where visitors can come, spend a day and enjoy great food, great wine and great theatre. As for getting more locals to understand just how lucky St. Catharines is to be hosting this world-class theatre festival, Vanstone says the easiest way to achieve that goal is to just get people in a seat to see their first production.

“We like to say, if you come see one show, you’ll come back and see the rest of the season because you’re going to love it. No matter what your mood is coming into the theatre, you will leave with a smile on your face. It’s just a wonderful afternoon or evening in the theatre that will leave you thinking about your life. You’ll see yourself reflected in Norm’s work. He’s a writer who writes about extraordinary events in the lives of ordinary people. It’s so relatable, so endearing and funny. You’ll laugh, you might shed a tear, but you will come back for more.”