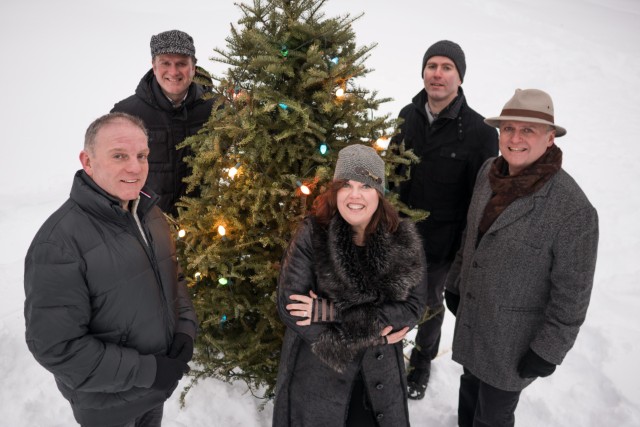 If you had to draw up a list of everything required for a truly Canadian Christmas, a copy of the Barra MacNeils’ holiday classic The Christmas Album would have to be included. Since its release in 1999 and its subsequent follow-up in 2006, the Barra MacNeils’ holiday-themed albums have endeared themselves to fans of Christmas music around the world by providing a direct link to warm, nostalgic memories of simpler times.

Currently on a Canadian cross-country trek annually billed as “An East Coast Christmas,” the Barra siblings – Sheumas, Kyle, Boyd, Lucy, and Stuart – combine on a vast array of instruments including accordion, guitar, piano, fiddle, bodhran, mandolin, banjo, Celtic harp, tin whistles, bouzouki, flute, all underpinned by the nimble-fingered Jamie Gatti on bass. The result is a sound that is unmistakably The Barra MacNeils, one moment a rousing chorus, then a hauntingly beautiful Gaelic ballad, the next a flurry of foot-stomping instrumentals. If the Christmas spirit truly exists, then it is physically manifested each night the Barra’s take the stage.

The Barra MacNeils arrived in St. Catharines for a December 3rd show at FirstOntario Performing Arts Centre. Multi-instrumentalist Stuart took time for a quick Q&A about Christmas songs, family traditions, and life on the road.

GoBe: What’s the best Christmas present you ever received?

Stuart: When I was five years old I got a harmonica for Christmas and I could play a song by dinner time. That’s a pretty good gift. That was my show and tell when I went back to school in January.

GoBe: What’s one Christmas song you could listen to all year, and one that you think should be retired and never sung again?

Stuart: Oh dear. I’d probably retire Mariah Carey (laughing). It’s a great song, but we definitely hear it a lot. One I could listen to all year? It would have to be something by Dean Martin. Dean Martin has always been a favourite in our household. I love going on YouTube and watching those old Dean Martin specials. They never get old.

GoBe: Why do you think the Barra’s two Christmas Albums continue to be so cherished?

Stuart: I think the experience we have had growing up have been pretty positive. The holidays have always been an uplifting time for us with family gatherings and lots of good memories. I think a lot of that comes across in the albums. To me it’s an interesting mix of stuff. Just to have Tommy Makem, we’re very fortunate he was such a big fan of the band. It set the bar really high for us. I think embracing traditions from the old country, our earlier generations from Cape Breton Island, and the fact all Canadians share the same winter experience. I can’t quite put a finger on it. There’s a bit of a universal appeal. It doesn’t have to be Christmas to appreciate them.

GoBe: What’s the first song you learned to play on an instrument in its entirety?

Stuart: It would have been my harmonica and an old Scottish song my uncle used to sing, These Are My Mountains. The first song I learned to sing was a Dean Martin song when I was four years old, “Little Old Wine Drinker Me.” I still keep it in my arsenal and pull it out when needed.

GoBe: At which of the family’s homes is Christmas dinner most likely to occur or do you rotate every year?

Stuart: Well you know we’re pretty fortunate that our parents are still with us. After the tour everyone’s pretty nackered but we still manage to make it there for Christmas Day. It’s a great gathering. It certainly is a joy to be able to spend time with them.

GoBe: I was looking at your Ontario schedule. You’re performing 11 shows in 11 nights. Where’s the 12th? I mean, the 12 shows of Christmas seems like a rather obvious opportunity. We’ll have to speak to Terry.

GoBe: 39 Days of Christmas doesn’t seem outrageous given how early Christmas songs start being played now. As someone intimately tied to the season, when is the optimal time to start spinning Christmas carols? November 1? After Remembrance Day? December 1?

Stuart: I think for us usually it’s after Remembrance Day. Somewhere after there we start putting shows together. The west coast in particular the first show was November 17th and it was a full house in Nanaimo. We’ve been doing this a long time, but once you get through that first show all of a sudden it seems right. It’s a season for us. Sometimes I say we’re like a broken down gentlemen’s hockey league going on the road. Every day someone else breaks down. At the end of the day, people want to get out and see something live.

GoBe: What’s an east coast family favourite food that gets served at the dinner table?

Stuart: Turkey is certainly the favourite. It’s something everyone anticipates. But lots of east coast lobster is getting more popular. This time of year the way the licensing works they’re fished out of the south shore of Nova Scotia. The waters are a bit warmer down there. It’s a dangerous business to fish lobster this time of year but boy, people do appreciate them.

GoBe: Final question, What do you love most about being a musician and performing?

Stuart: Wow, that’s a tricky question. I think it’s because it’s one of the few things you have to be in the moment for. It doesn’t just happen. People ask do you ever get tired singing this song or that song. But every time it’s performed, it’s no different than Wayne Gretzky scoring a goal. Just because he scored one yesterday doesn’t mean he doesn’t have to work as hard to score on the next day. I think that’s a big part about the stage in general, actors, musicians. It’s in the moment. There’s warts. There’s ugly things that happen in live shows. But you can’t replace the beautiful things that happen. It’s magic!

Get your tickets online at https://www.firstontariopac.ca/Online/default.asp.

Reserved seating tickets for The Barra MacNeils - An East Coast Christmas are $64.50 (HST and local facility charges included, ticket handling charges may apply), and are available from the box offices listed below. Showtime is 7:30pm. For more info, pics & music clips, visit www.shantero.com or www.barramacneils.com